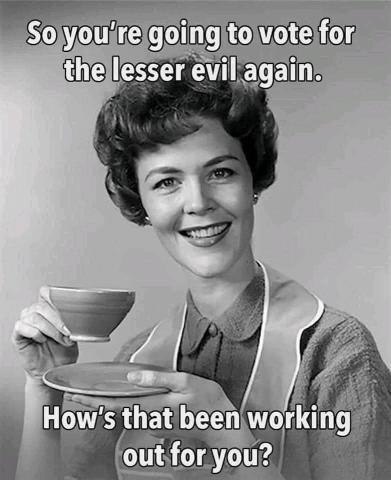 The FGP is temporarily on hiatus until the coronavirus pandemic abates and the local library (where we meet) re-opens.

We'd love to see you come back to the party when we resume. We will likely hold officer elections immediately upon re-convening, so by all means take a look at our bylaws and consider nominating yourself.

As you all are well aware, reform movements like Black Lives Matter, Occupy Wall Street, the People's Climate Movement, and the DSA, can have a big impact on public opinion, but none of these movements have a political outlet -- They are not recognized as political parties by the FEC. If they're lucky enough to have their causes taken up by the Democrats, the best they can hope for is a watered-down version of their intended legislation, and before they know it, they are forced into feeding and defending the two-headed beast that is our current political system.

So, it should be clear that nationwide, there is a strong need for a viable third party, along with alternative voting systems which don't require a "lesser of two evils" mindset. It should also be evident that without support at the local level, attempts to build a strong national Green Party will fail. The question before us is which causes can we most efficiently promote which will demonstrate to the public why a third party is needed, and how they can help fix the broken political system.

Some ideas which already have local support include the following:

There is also a nice summary HERE of why the Green Party is needed now more than ever.